Restoring Power in Hours Instead of Days 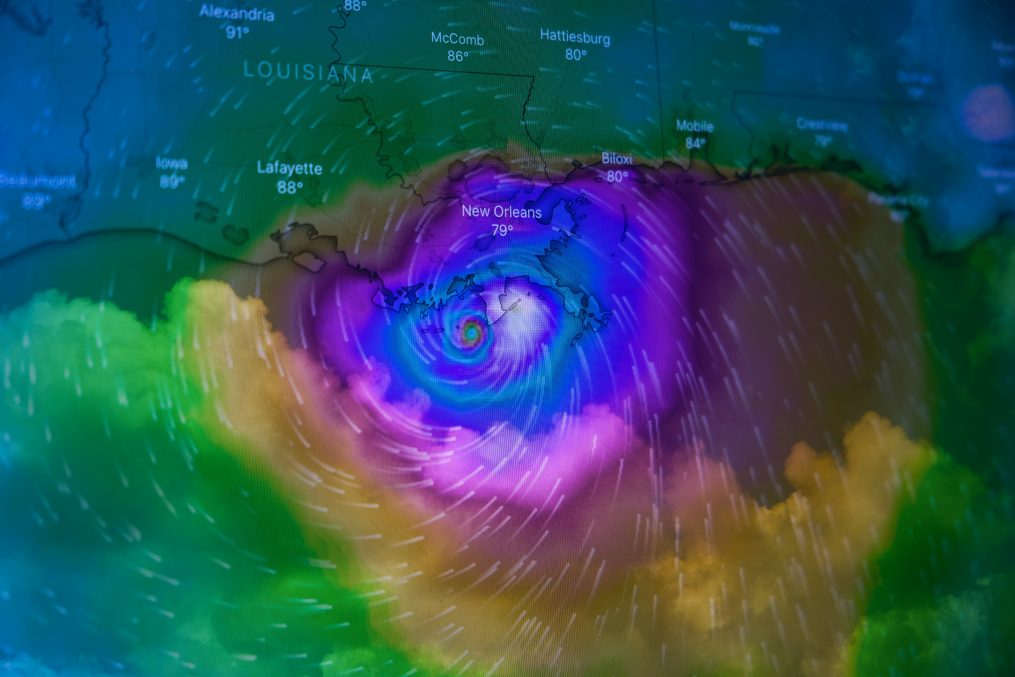 Storms are already contributing to a record number of electrical outages this year, and that number is expected to grow in the years to come.

It would seem the impact of climate change on extreme weather patterns is being overlooked by some grid operators and more power outages are on the way in the coming years as a result.

For years now unmanned aerial vehicles (UAVs) have been deployed to help utility companies reduce the duration of electricity outages. As a tool for initial damage assessment or post-storm analysis, UAVs can be employed to inspect large areas quickly and safely.

Especially when utility assets become hard to reach because of deep snow or flood waters, drone technology is being used to help utilities obtain the proper insight to determine what tools to allocate to the outage site and how to prioritize affected lines.

A winter storm early this year left tens of thousands of Virginia residents with 10 inches of snow and no power. Icy roadways and toppled trees prevented crews from evaluating grid issues by foot.

This is where UAVs came in. UAVs’ ability to pinpoint downed power lines and asset failures through aerial imagery and thermal technology helped outage crews identify the exact area of need. This lets outage crews spent less time detecting the problem and more time fixing it.

In the words of Kevin Curtis, VP of Electric Transmission at Dominion:

“[Using UAVs is] quicker, it’s safer, and it gets you access to areas that you might not otherwise get to until further into the restoration effort,” 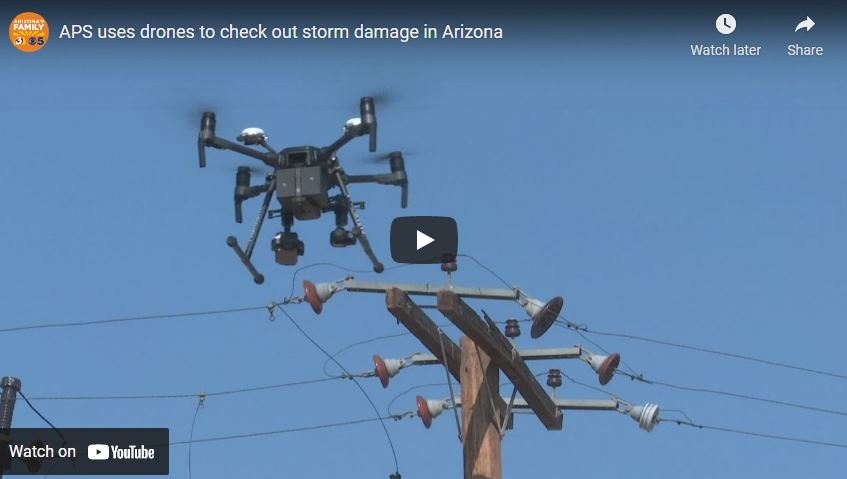 But after implementing UAVs into company operations, APS reports saving $1 million from decreased labor expenses and increased issue resolution speed. These savings come with a happier customer base who can worry less about prolonged outages.

The company now reports using drones for a majority of its solar, electrical, and infrastructural inspections.

Down south hurricanes that have bombarded the Gulf Coast more so in the past decade than ever before. With the average number of hurricanes increasing and becoming stronger every decade since 1980, ensuring electrical equipment can withstand a hurricane’s ravaging winds is critical. 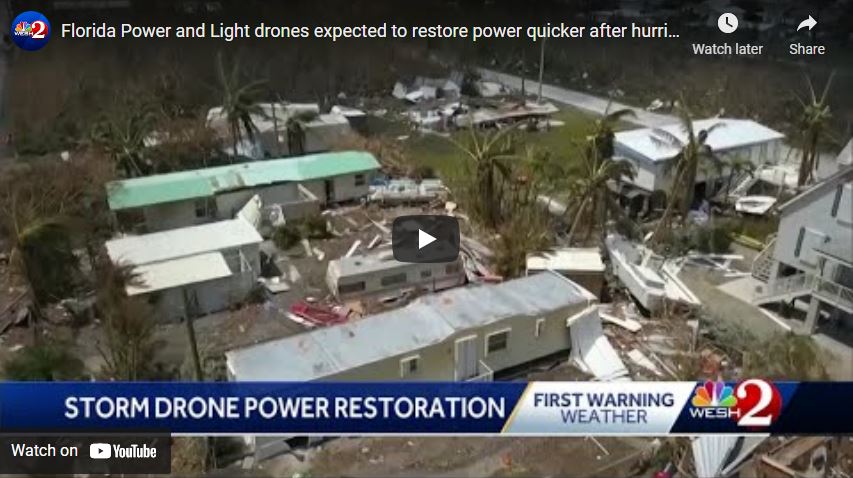 Michael Dorr, a Drone Pilot for Florida Power and Light (FPL) explained drones’ contribution to the hurricane recovery effort in an interview with WESH2 news:

“Hurricane Irma was the first time we deployed drones after a hurricane. It added immense value to find areas of damage that are inaccessible by flooding, down trees or other debris.”

Intense tropical storm weather creates areas of inaccessibility for technicians. What would have taken weeks to access due to hurricane damages was immediately accessible with UAVs.

During Irma, FPL made use of more than 1,300 drone flights, that’s nearly 300 hours of flight time.

The utilities’ utilization of UAVs is already making lasting impacts in Florida by giving restoration crews a helpful perspective on what hazards lay ahead of them, allowing crews to arrive prepared to return power to customers more quickly.

With recent technological advancements, the once tedious and time-consuming process of outage resolution can now be made more straightforward through UAVs. Drones reshaping the inspection process is saving utility companies money, time, and risk while simultaneously helping consumers get back on their feet much faster than ever before.

How Can Utilities Remedy Power Outages in Hours Instead of Days?

As the common ‘Stitch in time saves nine’ wisdom implies, if you address an issue immediately it’s likely to require much less time, effort, and expense to fix than if you allow the issue to persist and grow larger.

Similarly, detecting potential grid failures (i.e. cracked or damaged cross-arms, missing or loose hardware, vegetation encouragement, etc.) before the system is challenged by weather can significantly reduce the number of outages caused by a storm and the time it takes to address these weaknesses in the grid.

Ultimately something that might take days to remedy because of access issues (i.e. flood waters, deep snow, etc.) during a storm response scenario could be fixed in hours or minutes if only the utility new these issues existed.

In fact – utilities who optimize their maintenance and grid hardening efforts using current and thoroughly collected data can reduce their overall operational expenses by as much as 30% because this data allows them to deploy their resources more efficiently, decreasing the total labor and material costs required to make repairs.

Regular maintenance patrols of overhead assets delegated to linemen and inspectors often require entry into hazardous areas, hiking steep terrain, or climbing structures to understand the health of the equipment. This is dangerous work.

Not only is this dangerous, but technicians may have to spend large chunks of their workday simply trying to access the equipment  in need of inspection and they end up doing a very small amount of actual work. So it is inefficient too.

However, the use of UAVs in these scenarios, as part of a regular maintenance patrol can provide fantastic improvements in labor efficiency as well as a better understanding of the true health of the overhead assets.

With today’s infrared sensors, high-definition photos, and video – electrical infrastructure hazards can be detected and addressed before they cause outages or endanger customers or property.

While many of these same sensors can be flown using manned aircraft (i.e. planes or helicopters) or used by inspectors on the ground, there are still faulty assets that go undetected when patrolling overhead utility assets from the ground or when flying by at 60 miles an hour in a helicopter.

Similarly, it can take an entire day to inspect a single substation from the ground, but using unmanned aircraft multiple substations can be inspected in the same timeframe while also gaining the top-down perspective not achieved during ground-based substation inspections.

The 360-degree equipment view and thermal sensing made possible by UAVs allows utility managers to pinpoint potential failures before they unfold as Mike Kelly of Evergy explains in an interview for KSNW:

“We’re really able to see from all different angles of what could be causing a potential issue if a sensor, you know, trips and tells us that something’s hotter than it should be, we can take a look.”

When you can’t see the top of a structure, you run the risk of overlooking hazards that – if fixed in time – would prevent an unplanned and dangerous outage. What’s more is that these smaller repairs take much less time and cost the utility much less in the long run.

Have Questions About sUAS Inspection Services?

Or pre-schedule a time to chat by phone [HERE].

Soaring Eagle Technologies is a leading service provider for aerial mapping as well as critical infrastructure inspections and reporting services.

The Soaring Eagle team specializes in providing private and public customers reliable utility, energy, and infrastructure inspections for hard-to-reach and complex structures with the latest sUAS technology and remote sensors.